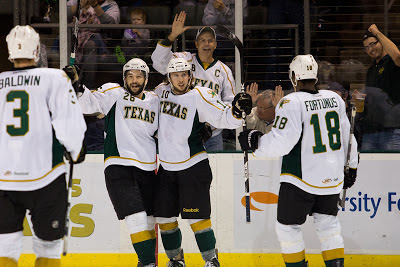 With a Saturday victory over San Antonio pushing them into first place, Texas is sitting pretty at the All-Star Break. However, it's about to get a whole lot tougher.

Coach Desjardins is definitely pleased with where his Texas Stars sit at the end of January. After a season that saw the club miss the playoffs and finish second to last in the league, being in first place at the All-Star Break is a nice accomplishment.

"It's nice to be in first. That was our goal: to make the playoffs. The more points you can get the better because their hard to come by after [the Break]. That certainly doesn't guarantee anything, but it's good to have those points."

The Stars aren't going to take any time to rest on their laurels. This is a club that has a top power play, but a near league worst penalty kill. They have been scoring a lot of goals recently but have also been allowing a few more than they'd like.

"There's lots of things to improve. It's so much harder to win after the All-Star Break. The lockout had a lot of guys shuffling around, and teams haven't gotten things back together a little bit. Just like we aren't totally in sync, other teams aren't either. Teams will start getting back in sync here."