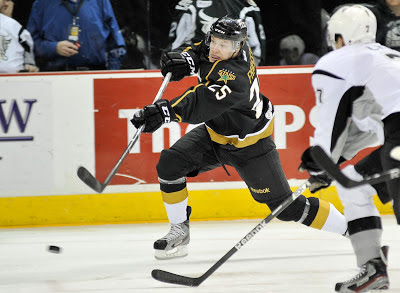 Matt Fraser won the accuracy shooting competition on Sunday and had a goal in Monday's All-Star Game as the Western Conference swept both events for a second straight year. Jamie Oleksiak was game-high plus-3 and had an assist on the game-winning goal.

Late in the game, the East captain and captain of the hometown Providence Bruins, Trent Whitfield, tied things up at six all. Down to the final twelve seconds, Toronto's Ryan Hamilton would complete his All-Star hat trick to win the game 7-6. Oleksiak was out for the final shift and generated the scoring attempt with the keep at the blue line and pass to OKC's Arcobello.

In the previous evening's Skills Competition, Matt Fraser won the accuracy competition for the West, knocking out four targets in five attempts. Jamie Oleksiak, who shot for the West in the hardest shot competition, did not have any shots recorded as he missed the net in both attempts.