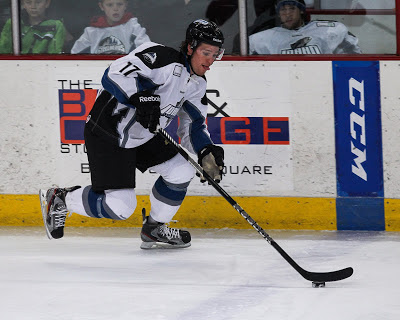 John Mulhern brings us another edition of the Idaho Steelheads Report. You can follow John on Twitter @Mulhern4

However, the roster was in flux again this week, as the AHL once again came calling, as the Texas Stars called up goaltender Tyler Beskorowany and forward Austin Fyten was signed to a Professional Tryout Contract with the Texas Stars. To top it off, the Steelheads then loaned out Andrew Carroll to the AHL’s Connecticut Whale.

The weekend against the Thunder would be the first test of a newly constructed line-up which added forward Mike Towns who was on the Steelheads roster for 1 game at the beginning of the season as well as adding goaltender Grant Rollheiser who played 19 games with Utah (Abbotsford Heat) earlier this season with a record of 7-8-3.

Friday was the first game with the newly re-tooled roster and for two periods it appeared as if the AHL call-ups finally had caught up to the Steelheads. Stockton would take a 2-1 lead into the third period along with a shot lead of Tyler Gron got his fifth goal of the year in the second period for the only tally for the Steelheads through 2.

However, in the third period, the Steelheads would finally cash in on their chances as the Steelheads (and Texas Start prospect) Jace Coyle tied the game with a power play blast from the point to make it a 2-2 game. Then with less than a minute to go, David Toews would pick up a loose puck and after a Stockton defender fell down, Toews would get the game winning goal on a great shot top shelf for the Steelheads win.

The two teams would once again play a tightly contested game on Saturday. The final score would be the same, however on this night the Thunder would come away with the victory. For 52 minutes of play the teams would play to a scoreless tie, however there was an 8 minute window where the teams decided they would entertain the crowd. Idaho’s David de Kastrozza would get the scoring started and Tyler Gron would end the scoring. Unfortunately, between the two goals, Stockton would put 3 past Steelheads goaltender Josh Robinson to come away with the victory.

After the weekend, the Steelheads maintained their 5 point lead of the Thunder with 4 games in hand as well as trailing the Aces by 8 points holding 3 games in hand against them. Overall, the weekend has to be considered a success. The Steelheads go on the road and come away with a split in two critical conference games with a roster that was picked apart just days earlier.

Austin Fyten
No longer a member of the Steelheads, Fyten was awarded the Reebok Hockey ECHL Rookie of the Month for January. Fyten had 6 goals and 11 assists good for 17 points in 12 games during the month. Fyten is the second Steelhead to win the Rookie of the Month award after Josh Robinson won the award back in November.

Tristan King
Once again didn't make the road trip as he continues to battle through a lower body injury. He still has not been placed on the 21 day IR so his return may be as soon as this weekend.

Jace Coyle
Along with Patrick Cullity, has provided some stability on the blue line and has also continued to chip in with points on the power play as it continues to work itself back into form.

The Steelheads finally return home on Wednesday and Friday to take on the Utah Grizzlies (Abbotsford Heat). These two games will start a 4 game in 5 night stretch of games against the Grizzlies as after Friday, the two teams travel to Utah for Saturday and Sunday. It also begins a stretch of games where the team will play 9 games in 12 nights.

Until next time...
idaho steelheads report