Stars, Campbell Shut Out Barons 4-0 in Front of Sellout Crowd 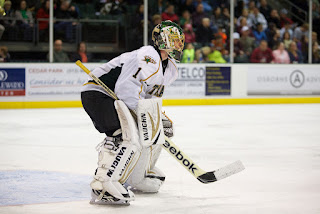 Jack Campbell shutout the Oklahoma City Barons tonight in his second game in as many nights while Texas scored four in front of him to support the 20 save effort. With the win, Texas moves to 68 points on the season, surpassing their point total for all of last season with 25 games still left to play.

"To surpass what we did last year doesn't really take that much," said Matt Fraser jokingly. Fraser had two power play goals on the night. "It comes down to the guys in the room. We're all on the same page. We come to the rink with our hardhats on and we outwork teams."

After last night's frenetic 4-3 shootout win, Texas needed no such theatrics to win this one in regulation in front of a sellout crowd. Bretton Cameron's first AHL goal was the eventual game-winner and Justin Dowling added his eighth of the year.

"I think we were a little more prepared for them tonight," said head coach Willie Desjardins. Coach Desjardins knows the team is doing well but is not looking ahead, "We're a one game at a time team. We are taking nothing for granted."

Texas and Oklahoma City traded penalties back and forth through the first period but neither broke through with the man-advantage. The Stars first goal of the game came at even-strength and with a lot of celebration from its scorer. Bretton Cameron potted the first AHL goal of his career off the high-slot deflection of a Jamie Oleksiak point shot. The puck flew past Hovinen on the glove side and set the score at 1-0.

"You can't say enough about our third and fourth lines," Fraser commented on the depth scoring. "We're successful because everyone wants to do their job."

The power play would strike for the Stars late in the period as Theo Peckham found himself in the box for closing his hand on the puck in the corner. The Stars got a fortunate bounce off some lively boards as Jordie Benn's point shot missed wide left but came out to Matt Fraser below the hashes on the right wing side. Quick action by Fraser put the puck on net where it deflected in off a Barons skater and in. The goal was Fraser's 23rd of the year and his 12th on the power play.

The second period's only action came as Alex Chiasson harassed a Barons defenseman behind the net. Chiasson tipped the puck to Justin Dowling who was crashing the net. In one motion, Dowling found an opening over Niko Hovinen's left shoulder possibly no larger than the puck itself and scored his eighth of the year, making it a 3-0 game.

"Those are critical saves because the team is playing so well in front of me," said Campbell. "If they get one rush and score, it kills everything they've been doing. I don't think we took a shift off all night."

The third period got a little out of hand on the player safety side. Alex Chiasson took a high hit late in the third period from Theo Peckham and stayed down for a while as trainer DJ Amadio tended to him. He skated off under his own power but did not return. Peckham received a major for boarding and a game misconduct for abuse of officials. Texas took advantage of the penalty as Matt Fraser collected his second of the night from nearly the same spot. Jordie Benn picked up his second assist of the night on the play.

The Stars are next in action at Rochester on Wednesday.

Travis Morin and Alex Chiasson will be re-evaluated tomorrow for their condition. Morin left in the first period and Chiasson in the third.