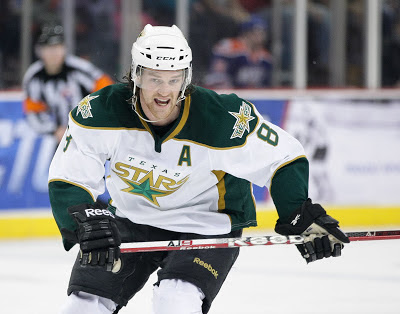 Over the weekend, Texas swapped players with Dallas as Reilly Smith was recalled to the NHL and Jordie Benn is expected to be assigned today.

Smith was recalled on Saturday as Ray Whitney was placed on IR for 4-6 weeks with a broken foot. Smith had two assists in his only game with the AHL club, playing on a line with Colton Sceviour and Matt Fraser.

Jordie Benn, who made the Dallas Stars out of training camp, is being assigned today according to his Twitter. Jamie Oleksiak had a solid showing on Friday and Saturday as Benn was scratched. With eight D in Dallas before this move, Benn is now assured of playing time and is definitely the first callup if anything goes south in Dallas.