Posted by Stephen Meserve on December 07, 2015
I was cruising the Twitterverse after last night's 5-2 Stars loss to the Admirals and this tweet from Ads' writer Daniel Lavender and team caught my eye:

Admirals have a 0.705 points percentage. They're second in the division, third in conference, and sixth best in the AHL. *blink blink blink*
— Admirals Roundtable (@adsroundtable) December 7, 2015

That tweet, of course, sent me on a beeline to the AHL standings. And there it is, clear as day. 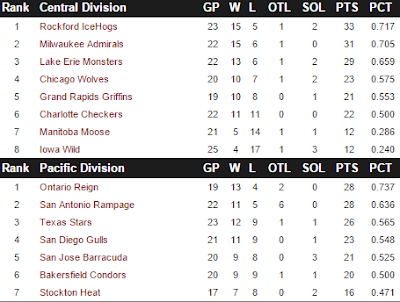 If the playoffs started today, the San Diego Gulls wouldn't make it. If you'll remember from the start of the season, the crossover rule is back. If the fifth place team int he Central Division has a better record than the fourth place team in the Pacific, the Central team gets the last playoff spot in the Pacific. As of today, the resurgent Grand Rapids Griffins would crossover and play the Ontario Reign in the first round of the playoffs.

For Texas, what was previously a race for top four in the division might be a race for the top three.

You'll notice that while Texas is in third place in the division, it's not a very comfortable margin when you look at the Griffins' points percentage. The Griffs, who've won eight in a row after starting the season 2-8-0-1, face a tough test on Wednesday against Milwaukee. However, if they win they will leapfrog the Stars' points percentage (.575 v. .565).

It's pretty clear with all the competition in the Central that the Stars are not competing against San Diego and Bakersfield for playoff spots. They are competing against Chicago and Grand Rapids as well.
analysis