Posted by Stephen Meserve on September 26, 2016 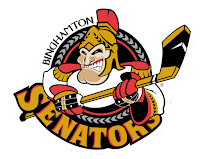 As was expected this morning, the Ottawa Senators announced their plans to move their AHL affiliate to Belleville, Ontario.

Binghamton, home to the Senators' AHL club since 2002, is working to secure an AHL franchise for the city. However, with all the movement and consolidation that has happened recently and other cities, such as St. Johns and Portland, Maine, currently without teams for the 2017-18 season, it's going to be a tough road.

Belleville is about two hours east of Toronto city center and 2.5 hours from Ottawa. The city, with a metro population just shy of 100,000, previously hosted the Belleville Bulls of the OHL. The Bulls left town in 2015 for Hamilton, replacing the AHL's Bulldogs there with an OHL team of the same name. The club played in Yardmen Arena, which has a capacity of 3,257. The city council has pledged CDN$18.5 million (USD$14 million) for arena upgrades, including capacity improvements. The smallest arena in the AHL currently is the Utica Comets' home rink, Utica Memorial Auditorium (or the Aud), at 3,860.

For many northeastern AHL fans, this is the continuation of a sad trend. Cities such as Binghamton face the potential of no AHL hockey in the near future as teams move their AAA clubs closer to home. The Texas Stars are an example of how well this model works and surely NHL GMs are taking notice.

In case you missed it, the fine people of St. John's will also be losing their AHL team this coming summer as the team relocates to Laval. Just 16 minutes of city driving will separate the home arenas of the Canadiens' NHL and AHL teams.

Per Binghamton: " [Ottawa's] decision to relocate has no impact on the future of the AHL's presence in the Southern Tier." #AHL

around the league relocation