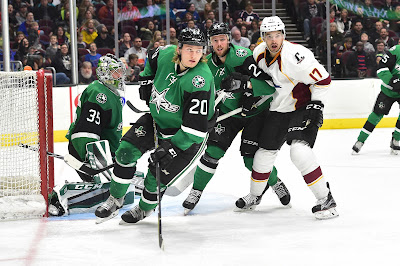 In their fourth game on this seven game road trip, the Texas Stars laced them up against the Cleveland Monsters again for the second time in two days. The Stars finished with a win in Friday's game with Roope Hintz tallying two points. They also held the Monsters to one goal in large part because of Landon Bow's strong recent play. Hoping for a repeat performance, the Texas coaching staff opted to start Bow again on the second game of a back to back. Minding the opposite crease in his second AHL game of the season was Joonas Korpisalo, who had been reassigned earlier in the day by the Columbus Blue Jackets.

Bow finished the game with 21 saves on 23 shots. The Stars benefitted from balanced scoring as eight different players picked up a point. Stars rookie Samuel Laberge made some personal history by scoring his first career AHL goal which counted as the game winner.

The first six minutes saw the Stars draw three penalties. First, Cleveland defenseman John Ramage committed a hooking minor. Hintz took a bullet pass from Matt Mangene and tapped the puck in the back door against Korpisalo. Later, Colin Markison had his legs taken out from under him on an interference call. During the power play, Brady Austin was called for slashing, gift-wrapping 1:48 of 5-on-3 time to the Stars. The Stars couldn't convert as Korpisalo made a couple of huge saves.

The Stars weren't able to celebrate their first goal for long. Less than a minute later the Monsters had an answer. Nick Moutrey hacked at a loose puck in front of the net that found its way past Bow. It was Cleveland's second shot on goal. Markison then committed a tripping minor that gave the Monsters their first power play. The Stars killed the penalty, and the teams entered the first intermission tied at one, and tied in shots on goal with five a piece.

Travis Morin committed two tripping minors in the second period. The first proved to be fruitful for the Stars as they scored their second shorthanded goal of the season. Brian Flynn and Brent Regner created a 2-on-1 on the penalty kill, and Flynn finished the play with his fifth goal of the season. The second was ten seconds into a power play for the Stars that sent play to 4-on-4. Just as the game was about to be at even strength, Mangene stepped onto the ice too soon and the Stars were penalized again. Terry Broadhurst had a good look on the Monsters' third power play, but Bow shut the door. Texas outshot Cleveland 11-7 in the period.

The Monsters blitzed the Stars with a few early shots in the the third period to no avail. That was when Laberge put his fingerprints on the game with his first career goal. Max French and Dillon Heatherington recorded the assists. Cleveland committed a late delay of game penalty by erroneously clearing the puck over the boards in their own zone. Mangene was caught for tripping while on the power play, and the game went to 4-on-4 for a second time.

Bow benefitted from a couple of breaks in the period as the Monsters hit a couple of posts and couldn't finish plays. That was until Miles Koules scored on redirected shot in front of the net to make the game interesting. Ultimately, they completed the sweep and made a strong statement as they continue to string together decisive road victories.

The Texas Stars continue their road trip against the Grand Rapids Griffins on Wednesday, November 29th at 6:00 PM CST.