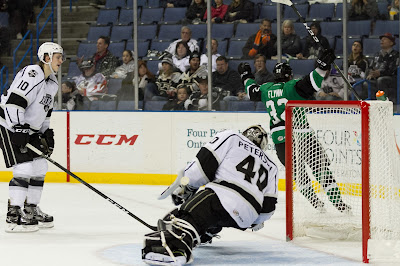 Winners of 9 of their last 11 games, the Stars took a radiant 6-0-0 overtime record into Ontario only to have it blemished as the Reign came out on top 4-3. The Stars had the edge on special teams, going 1-for-4 on the power play and 3-for-3 on the penalty kill. They also scored in a myriad of ways--one goal at even strength, one on the power play, and one shorthanded. It wasn't enough to overcome the Reign who had an answer for everything in this game.

Rookie goaltender Cal Petersen got the start for the Ontario Reign, and the Stars had him scrambling for saves in the first period. Samuel Laberge and Jonathan Racine dropped the gloves for a spirited bout to give the two five minute fighting penalties. Both teams recorded seven shots on goal at the first intermission. Andrew Bodnarchuk opened the scoring and got his third goal of the season in remarkable fashion. Fifteen seconds into the second period, he fired a shot from the point that sailed wide of the net, deflected off the end glass, and bounced off of Petersen's back into the net. Then the Reign's physical forecheck started to give the Stars issues.

The Reign tied the game shortly after the Bodnarchuk goal when the Stars turned the puck over in their zone and set up a 2-on-1 situation for the Reign. Mike Amadio, who had four points against the Stars this season, had the initial shot, and Austin Wagner cleaned up the rebound. Another turnover late in the period gave Andrew Crescenzi all day to wait out Landon Bow and wrap the puck around the net to put the Reign up 2-1. Bow finished the game with 21 saves on 25 shots.

Texas needed some kind of shot in the arm to take them into the locker room and got it from Brian Flynn and Jason Dickinson. The Stars took their second penalty of the game, and Dickinson broke out of the defensive zone, narrowly avoiding a body check, and centered to Brian Flynn who was all alone in front of Ontario's net. It was the Stars' fourth shorthanded goal of the season.

Bow made three successive saves early in the third period to keep the game even. Seizing a golden opportunity on the power play, Justin Dowling shot a puck through traffic that Petersen never got a bead on and gave the Stars the lead. With six minutes to go, the Stars allowed a tough goal as Cory Ward got just enough of a desperation centering pass to tip the puck in and tie the game at three.

Ontario winger Justin Auger was left unchecked in the overtime frame after the Stars turned the puck over and he beat Bow easily to win the game.

The Stars continue their road trip through the Golden State and will square off with the San Jose Barracuda on December 22nd at 9:00 PM CST.