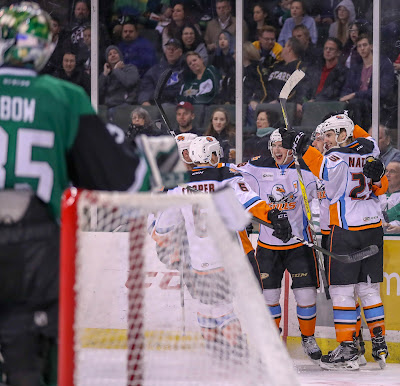 With several key veterans out of the lineup, the Texas Stars emptied the tank against San Diego and came up short in the final period. The four-goal frame for San Diego pushed them past the Stars by a 6-3 final to close Texas's 2017 campaign.

"We had good energy in the game, but we have a depleted lineup," said Laxdal. "And that's the fullest they've been all year."

Brian Flynn, Justin Dowling, Brent Regner and Niklas Hansson were all absent from tonight's game, putting young players in big minute situations, especially on the power play. Texas did manage to score a goal with the man advantage but had seven opportunities and couldn't get any more.

"I thought we forced it," Laxdal said of the power play and offensive play in general. The game really hinged on a 5-on-3 advantage Texas earned early in the third period. Trailing by a goal, the Stars took a timeout to strategize. They got everything they needed, loading up Greg Rallo on the left wing dot for the best chance of the power play.

"We tried to make a play, and Rallo fell down and turned it over. It was a key point in the game. If we get it back to 3-3, it turns the game there. That was the difference in the game."

There were plenty of other power play opportunities but the personnel were newer to the units. Shane Hanna and Gavin Bayreuther both checked in, for example.

San Diego got things started in the first with a power play goal of their own. Texas was outshot in the first period heavily, at one point trailing 10-3. "The times we were successful was when we were throwing pucks and bodies to the net," diagnosed Sheldon Dries. "When we got to that fancy games, things kind of swung in their favor."

Denis Gurianov answered on a cram play at the net to make it 1-1 toward the end of the second. NHL vet Eric Fehr wasted no time regaining the lead for San Diego just 45 seconds later and Nic Kerdiles extended the lead to open the third period.

Sheldon Dries got Texas back within one, setting up the aforementioned chance to tie on the 5-on-3 just a few minutes later. It was a rough second call for San Diego as Brian Cooper lifted the puck out of play to the right of Landon Bow, but from his own zone.

The Stars missed on the chance to tie and gave up two more in quick succession, including Eric Fehr's second of the night. This one came on the power play.

The Gulls would find the empty net late but Texas got one more for good measure. It was a solid reward of a goal for Tommy Thompson, who was recalled yesterday and played in his first game on an AHL contract this evening. "I thought Tommy was really good," noted Laxdal. "He's played really well tonight, a lot of poise with the puck and going to hard areas. It's good to see him rewarded."

The Stars get a quick chance for redemption next week as the Gulls stay in town to face off with Texas again on Wednesday.