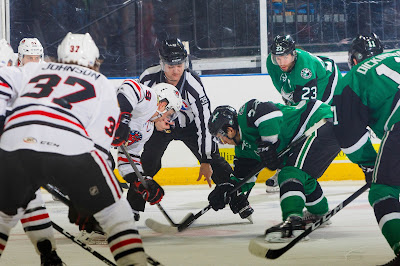 (credit: Rockford IceHogs)
Attempting to win their sixth straight game, the Texas Stars took to the ice against the Rockford IceHogs on Saturday evening to wrap up their lengthy road trip. Making some real headway in the standings, the Stars had won five of their last six, and eight of their last ten. Saturday's game was their first of four meetings against a Rockford team that started the season strong but has been up and down as of late. The Stars were without their captain, Curtis McKenzie, as he was called up early on Saturday to join the nicked up parent club.

The Stars got the start they were looking for to stay hot on the road, but things got away from them fast in the second period and it was too much to overcome as Rockford kept their foot on the gas in the third. The IceHog's top scorer Vinnie Hinostroza finished with a goal and two assists, and Anthony Louis notched a goal and an assist. The Stars' offense was mostly stagnant and they only received goals from Roope Hintz and Mark McNeill, who drew into the lineup for a second consecutive game.

Landon Bow got the starting nod in net for the Stars, and it was paying off early. Hinostroza had an early one timer from the slot that Bow handled admirably. Gavin Bayreuther gave the IceHogs their first power play about five minutes in with a tripping minor. After a successful kill, the Stars countered with shot attempts in the offensive zone that made Rockford goaltender Jeff Glass sweat. Cole Ully was inserted into the Texas lineup and rewarded his team with a power play opportunity as he was tripped up on a 2-on-1 breakaway.

Hintz was all alone in the slot and had a chance but was thwarted by Glass. He would not be denied a second time. The teams traded two more power plays in the first period, and the Stars were successful on their second kill, but the IceHogs were not. Hintz found twine with a wrist shot that beat Glass for his eighth goal of the year. He has been scoring at a point per game clip in the last eight.

The second period was tough sledding for the road-weary Stars. Hintz was too aggressive in the second period and was called for a hook. The Stars couldn't finish their third consecutive penalty kill, and Anthony Louis beat Bow on the IceHogs' 13th shot of the night. Hinostroza kept rolling for his team and fired a slap shot that Bow got a piece of but had it trickle through his legs. To go along with the assist on the Louis goal, it was Hinostroza's second point of the night to bring his total on the season to 21.

Louis wasn't finished for the IceHogs either. He forced a turnover in the neutral zone and found William Pelletier on the rush who finished the play with his second goal of the year. Just like that, the Stars were down by two with little going their way in the offensive zone, though they were outshooting Rockford 20-18.

The third period wasn't much kinder to the Stars. They committed an early penalty, but drew one themselves on the penalty kill. During 4-on-4 play, Hinostroza created again for his teammates as his centering feed produced two scoring chances for the IceHogs. The second attempt was finished by Darren Raddysh. Brent Regner gave the IceHogs their fifth power play of the night as he was caught for a hold.  Though they killed the penalty, the Stars were eventually buried by a goal from Luc Snuggerud.

McNeill finished his goal late in the third period on a helper from Travis Morin, but it was too little too late. The Stars had to empty their net and paid the price as Rockford scored almost immediately. Texas finished the game going 1-for-6 on the penalty kill, but taking that many penalties isn't a recipe for success on the road. Glass had a fine game against a Stars team that was rolling heading into Saturday and finished with 29 saves on 31 shots.

The Stars will finally feel the comforts of home against the Iowa Wild in Cedar Park on Tuesday, December 5th at 7:30 PM CST.