Posted by Stephen Meserve on September 26, 2019 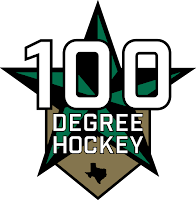 When I first started 100 Degree Hockey in 2009, I didn't really know how deep this thing was going to go. Ten years later, it's clear that it's gone very, very deep.

I designed the first logo for the site in my home office in maybe an hour. It served me well for years, but now it's time to get professional. I sought the assistance of a designer and a friend, Graham Fleming, to work on what the logo needed to say about the site.

Graham (who I recommend to anyone) did some extensive work to look at other sites around the NHL and AHL and across other sports as well. We had several planning sessions and worked through numerous drafts of the logo.

I wanted to retain a few key elements while updating the colors and enhancing the branding aspects through inclusion of the wordmark. In the end, we found the logo you now see here, on Twitter and on Facebook. It includes the expected green tones but also includes old gold as a throwback to previous color palettes and as a way to make it distinct from the Texas Stars or Dallas Stars color scheme. We had to include the state of Texas and a barnstar, as in the original design.

I'm still working on updating merch to include all the new designs.

Further, the site was also slapped together using a dusty template that has evolved in unexpected ways over the years. As responsive web design has become the standard for websites, 100 Degree Hockey did not follow along. The site is not a big operation from the resources side of things and making a template move is time-consuming. In the end, I selected the template you see now. I still want to tweak and change things to improve the experience (and welcome your feedback on what you miss or don't miss from the past design). However, this allows you to see many articles at once on the homepage and not have to scroll forever to get to the next one. Also, it is responsive, so it will be served well on mobile devices, which is where most of you consume 100 Degree Hockey.

Thank you again to everyone for your continued readership. To another ten years!