An Early Evaluation of the Two Referee System in the AHL 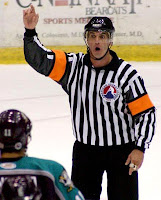 This year, the AHL has instituted a two referee system in 25% of their regular season games and all of the Calder Cup playoff games. Given that the AHL is a development league for players, coaches, and referees alike, this has been presented as an opportunity for all of those people to gain experience with the two referee system that is used in the NHL.

The NHL first switched to a two referee system on a trial basis in 1998-99 and made the switch permanently in 2000-01. With the renewal of the NHL's development contract for officials in the AHL this year, the NHL requested that the AHL phase in a two referee system to allow developing refs to gain experience with the system.

Surprisingly, one of the major concerns voiced by the NHL is the officials' proficiency in backwards skating. "When you are in the one-ref system, you are like a forward -- going forward all the time," NHL Director of Officiating Terry Gregson told NHL.com. "And when you go to the two-ref system, you have to switch to backwards skating, which is a very important part of the skills set."

So far this year, Texas has played 17 games with 4 of them using four on-ice officials. In the four games with the extra official, Texas has averaged an extra minor penalty (11.23 PIMs/game vs. 13.75 PIMs/game). However, the statistical validity of a 4 game sample is debatable, surely. Overall, the Stars and their opponent have been penalized only slightly more often in two referee games (27.75 PIMs) than singles (26 PIMs).

Texas Stars Head Coach Glen Gulutzan is a fan of the changes. "I think if you let guys at this level do it for a longer period of time, they'll get a little better at it, a little cleaner at it and the games will become more well managed."

Gulutzan hasn't seen a huge difference in the number of penalties called in his estimation, which we've shown with our data. He does feel like it brings more certainty to the game. "Every night [referees are] making calls that they kind of see because it's hard for one guy. [Having two refs] takes a little bit of that guesswork out of it."