Around the League: Stars Re-Sign the Captain, Lose Others 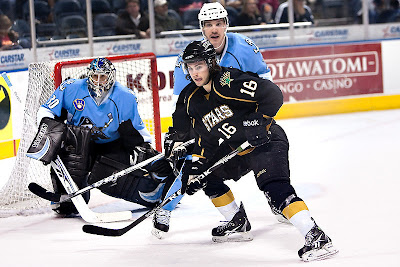 The Stars had a few player transactions in the past couple of days. Yesterday at 5 PM EST was the deadline for teams to extend qualifying offers to restricted free agents. Dallas had only two RFAs who had not previously signed, Sean Backman and Guillaume Monast. Neither was extended a qualifying offer. Colton Sceviour and Richard Bachman were previously re-signed.

Monast has been picked up by the Sanguenay Marquis of the LNAH two weeks ago, according to this article. His professional career will continue in the province of Quebec.

It was also not expected that Sean Backman would be extended a qualifying offer. Backman, a free agent pickup last year out of Yale, had seven goals and sixteen assists in 67 games for Texas. I don't imagine that his professional career is over; he will likely get a shot at an AHL or ECHL contract elsewhere. It is not out of the realm of possibility that such an offer comes from Texas.

In other news, the captain is back. Brad Lukowich broke the news on his own Twitter feed last night. Details of the contract were not immediately available, but Lukowich's comments later in the evening implied the contract was two-way.