Sources: Gulutzan Expected as Next Head Coach in Dallas 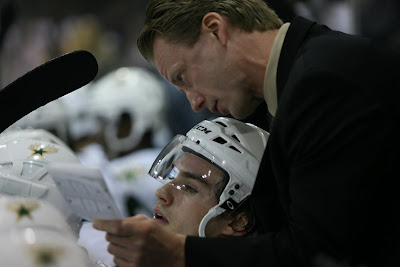 Per Mark Stepneski, multiple sources are now confirming the hiring of Texas Stars head coach Glen Gulutzan as the next head coach of the Dallas Stars. Gulutzan beat out other candidates including Pete Horacek, Kirk Muller, and Ken Hitchcock for the right to succeed Mark Crawford as the bench boss for Dallas.

Gulutzan has had tons of professional success as a coach, with his clubs only missing the playoffs once in eight years. Furthermore, his teams have failed to advance to the third round or beyond only once since 2005. In two years at Texas, Gulutzan is 87-56-7-10 in the regular season and 16-14 in the playoffs. Austin hockey fans know that the Texas Stars ice a competitive club every night and a big part of that has been the mentoring of Coach Gulutzan.

It is with mixed emotions that the Austin community will see Coach Gulutzan move on to the NHL. Surely, the fans will be proud and excited to see the coach "called up" to the big leagues. It will add yet another rooting interest to the Dallas games. On the other hand though, Coach Gulutzan was a great piece of this hockey club and will be sorely missed.

Finding his replacement will not be hard, in my estimation, as Paul Jerrard is an excellent coach who can help continuity for the AHL team. Texas GM Scott White should have an interesting summer as he tries to get deals done for players like Greg Rallo and also needs to find a new member of the coaching staff.

And on a more personal note, almost a year ago, I interviewed Coach Gulutzan at prospect camp, asking him what he thought of Austin. Suffice it to say that he, and his family, will miss this town very much when they leave:

It's tremendous. I remember a year ago to the date my wife crying that she didn't want [to leave Las Vegas] to go look at houses in Austin. Now, I couldn't pry her out of there. She loves it; my kids love it. What a fabulous city. We rave about it in Canada, how nice it is. Great community, great community people. I think that's what makes something you call home, when you're surrounded by good people. Certainly we've made Austin our home pretty quickly.

Guess it's time to look for a new house.
roster moves