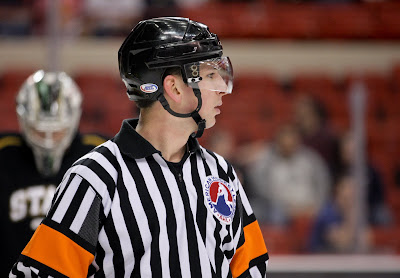 NHL GMs are meeting in Boca Raton, Florida, this week to discuss the things that GMs discuss, among them potential rules changes to the great game of hockey. Among the rules changes considered for the future could be the addition of what is being called a "ringette" line. Many GMs want to see it tested at the AHL level before they send it to the NHL, and that's nothing new for the American League.

The line comes from the game of ringette. It would run across the tops of the face-off circles. When coming out of the defensive zone, teams would have to advance the puck to the line before they could pass it to the far blue line.

It's a compromise between leaving the game as it is and re-instituting the red line to outlaw two-line passes. In theory, it would still allow for a stretch pass, but it would keep teams from firing the puck from deep in their end to the far blue line and simply tipping it to avoid icing.

The AHL has a history of testing out new and different rules for the NHL.

The year of the NHL lockout (2004-05) was a big one for the AHL. The league had a record gate of 7.1 million fans as NHL stars and fans alike went to the league for their dose of hockey. Several rule changes were tried that year that made it to the NHL. Two of the big ones include the mobile goalie stifling "trapezoid" and the shootout to decide a winner after OT. Additionally, the league implemented wider blue lines, presumably to make it easier to keep the puck in at the point, and tag-up offsides. All of those items made it to the NHL after the 2005 CBA.

One of the more bizarre rules changes that the AHL tried out for the NHL that year was the institution of one-minute penalties in OT instead of two minutes. Obviously that one went over like a lead balloon as it never made it to the NHL level. Another, which is still a point of contention, was the adoption of no-touch icing. The NHL is currently looking at adopting what they are calling hybrid icing as a compromise to this. The NHL decided not to implement no-touch and the AHL reverted to touch icing as well in 05-06. For the record, many other leagues use no-touch including the ECHL, CHL, IIHF international competition, European leagues and almost all amateur league.

Since the AHL adopted the last few rules necessary to align themselves with the NHL rulebook in the early 2000s (delay of game for puck over the ice was one of the last sticking points), the NHL has used the AHL for rules development as well as player, coach, and official development. It is a positive relationship that the league could be continuing this coming year with the "ringette" line.

I think they're going to need a better name for it though...