No Reilly, But Chiasson On The Way 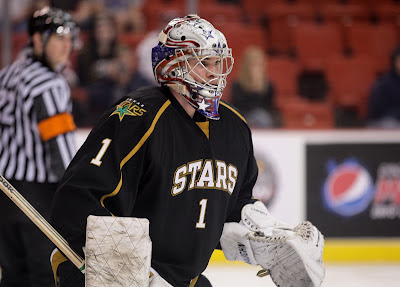 ATOs are giving the fans something to cheer for in the Stars' final games. (Credit: Steven Christy)
Yesterday, the Dallas Stars announced the signing of college prospect and 2009 draft pick Reilly Smith to an entry level contract with the club. However, Reilly will not be playing with Texas this season; he will immediately go to Dallas. Second rounder from 2009, Alex Chiasson (SHAY-son), who just also finished his college career, will play with Texas this season though.

Common perception before yesterday was that Reilly would sign an ATO, like Austin Smith, and come to the Texas Stars. Joe Nieuwendyk, however, believes that Reilly can help the NHL club immediately and is willing to lose a year of his contract because of it.

Typically, players on ELCs are allowed ten games before the contract "kicks in" and counts as a year off the contract. This usually happens at the beginning of the season. For example, an NHL club will keep a player who was slated to play in juniors and is on the cusp of the NHL. They can put the training wheels on him for nine games and see how he does. However, once he plays that tenth game, the contract "begins" and cannot slide another year.

[Update to this section thanks to anonymous commenter below...]

However, a player who is 20 or older when he signs can't benefit from a "slide". The contract expires when it expires. Because Reilly was 20 when he signed his ELC, he can't "slide" a year. That is good for Reilly and bad for Dallas, as the Stars will now only have his services at the low ELC price for two years instead of three. Nieuwendyk must be very confident in his game helping Dallas for this to happen.

If he hadn't been so confident, he would have likely directed Texas to sign him to an ATO (a la Taylor Vause) with the expectation that he would sign an ELC over the summer.

Alex Chiasson, however, will be coming to the Texas Stars this week. He should be in the lineup in time for the homestand this weekend. Chiasson is a big bodied winger out of Boston University. Dallas has confidence in his game as well; many place him on the NHL roster to start next season. Chiasson is best off starting his career now as well and getting away from the toxic Boston University hockey program.

It is clear that Texas is willing to give these ATOs a shot. Smith plays now with Sceviour and Wathier, bumping Glennie to a line with Morin and Fraser. I expect Chiasson will force some hard decisions in the lineup, because Dallas will definitely want to see him in a top six role.
analysis