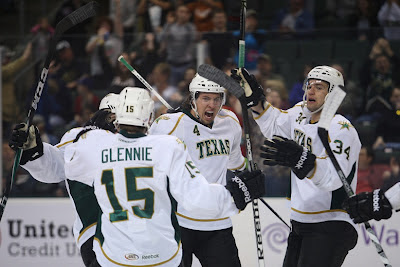 Last week in this space, we talked about some franchise records that had fallen this season for the Texas Stars (27-33-2-2, 58 pts, #15 Western Conference). This week, we are also talking about a franchise record broken, consecutive games lost. With their fifth straight, Texas broke that record on Monday night.

Texas has been plagued by bad defensive zone coverage and endemic lack of finish in the offensive zone. "Everybody needs to [step up]," said Coach Pyle. "We give up too many easy goals and situations where you have a way to win and find a way to lose."

For Dallas fans, the big story is amateur tryout contracts. Jack Campbell should join Texas today and Austin Smith as late as Wednesday. Taylor Vause, a signing out of the WHL, played in his first pro game on Monday night and could sign an ELC with Dallas for next season.

As to the ice time for the ATOs: "If they're going to work hard, they'll play as much as we can possibly play them. Obviously the guys [here] right now aren't getting it done, so we'll take a look at the new guys as much as possible."

Pyle added, "Campbell will definitely be getting starts."

Coach Pyle has been a quote machine this past week so I'll close with this one before sending it to the jump:

"We don't deserve the playoffs. I've said from day one: we're riverboat gamblers. You win by the sword; you die by the sword. We deserve what we've got. We've earned the position we're in, even with injuries and callups we've had chances to win. We put ourselves in a position to win and then we don't follow through because we don't have guys committed to the team."