Will Texas Welcome Another Smith This Week? 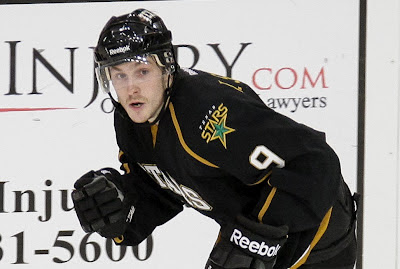 Austin Smith wore "A. Smith" on his nameplate Friday in OKC. (stick tap to @silvertongue) Is that presaging something? (Credit: Steven Christy)

Texas could be seeing the addition of yet another Smith to its roster in the coming days. Last night, Reilly Smith's Miami RedHawks fell to the UMass Lowell Riverhawks in overtime in the NCAA college hockey tournament. The RedHawks, down by three to start the third, fought back to make it to OT but fell 4-3 in extra time.

Reilly Smith, a junior, was Dallas's 3rd round pick (#69 overall) in the 2009 draft. Other 2009 Dallas draftees include Scott Glennie, Alex Chiasson, Tomas Vincour and Curtis McKenzie. It is widely postulated that Reilly could turn pro next year and an ATO in Texas would be the way to start that career off.

The only hangup is his collegiate status. Reilly is a junior. Like football players, hockey players can leave college early to play in the pros. However, that decision is a hard one to make, just as in football. For an example of another player who left early, Texas only has to look at Richard Bachman, who left Colorado College after his sophomore year to turn pro.

Director of Player Development Les Jackson told DallasStars.com in February: "We'll have discussions with him and assess at the end of the year where we're at. But that's something we'll have to work out. He looks like he's close to taking the next step. We'll just have to discuss that with him and his family and see what the next step will be."

Now it's the end of the year. I'm sure those conversations Jackson mentions will begin over the next few days with Reilly. Much like Austin Smith, expect Reilly to sign an ATO in Texas but then also sign his ELC with Dallas. Of course, that's all dependent on him deciding in the next three weeks to go pro. The decision could even be something he pushes off until the summer.
analysis