Around the League: Some Texas Stars Signing In Europe Soon? 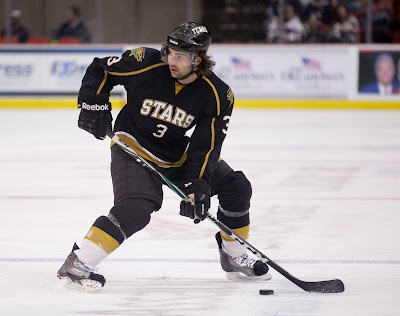 This week saw a lot of AHL-only contracted players bolting for the European leagues. Lured by many different things, now is the time of year when the transactions page begins to light up with transfers to the various different leagues.

Many are lured by the money. Third line players here can be considered top guys in the Euro leagues and are paid accordingly. Many others enjoy the larger ice sheet and less physical game, as it offers a chance to extend their career by not beating up their body. This is especially attractive to older players. Finally, many players decide to return to their native countries to play as celebrities instead of living life on the margins of professional hockey in America.

You can monitor the confirmed transfer section on eliteprospects.com to see those transactions as they happen. Among Texas Stars, I expect that defenseman Dan Spang would be the most likely to leave for Europe. Spang played the 09-10 season in Germany's DEL before being lured back to the states by Scott White and the Texas Stars. Spang signed with the Vaxjo Lakers for the 11-12 season, but broke that deal to sign with the Dallas Stars on a two-way.

He burned a bridge with Vaxjo to make the signing, with Lakers Sports Director Henry Evertsson calling the relationship "a closed book". Midseason, there were rumors that Spang was leaving the AHL to sign with MODO of the SEL. Swedish papers reported a verbal agreement for Spang to leave the Texas Stars and join MODO. The deal ultimately fell through at the transfer deadline (January 31).

Spang represents a valuable commodity to European clubs, as he has an Italian passport and doesn't count against common limits on foreign-born players despite being born in Massachusetts. All that being said, Spang might have some recently established ties keeping him here in the US.