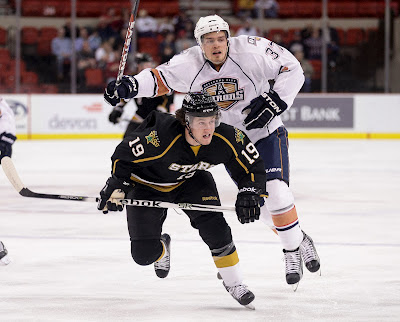 After just a five game tryout at the end of last season, Taylor Vause made enough of an impact to earn a training camp invite for the 2012-13 season. Swift Current PxP voice Shawn Mullin first reported the story here on his blog. The Stars confirmed the story to 100 Degree Hockey but had no further comment.

Vause had a goal and an assist in those five games before breaking his foot blocking a shot and ending his season. Vause spent his junior career with the Swift Current Broncos, finishing his four year as team captain and leading the club in points.

The invite is a great one in my estimation. The Stars have picked up quite a few leaders from junior in their free agent picks, including Brenden Dillon, who captained the Thunderbirds in his final season in Seattle. The fact that Vause broke his foot blocking a shot in a completely meaningless game at the end of a lost season speaks to his commitment.