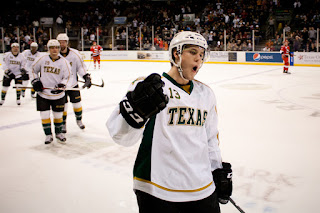 (Credit: Josh Rasmussen/Texas Stars)
I'm going to use the word "realist" to describe Tony Uminski. In my time reading his work at the San Antonio Express, it is clear that he has a very clear view of the team and tells it as it is. That's why it's notable that he wrote the following this week:

"If [86 points is] the goal, and the Rampage currently have 28 games remaining and 46 points, it’s gonna be tight and two or three teams have to take the gas pipe over the next two months for the Rampage to have a reasonable chance.

Not impossible, but let’s just say, feel free to plan some time at Fiesta without hockey.

Indeed over the next few months, teams are going to start saying goodbye to their playoff chances. San Antonio will not be first. That will probably be Hamilton, in last place by a six points this morning. Regardless, things are tightening up. Every team is going to have that little extra push as they realize that the doors to the playoffs are closing.

The Stars are on the other end of that equation. Because they are in first place, they've got the target on their back. Every team gives Texas their best effort because it's quite the feather in your cap to say you beat the #1 team in the league. We saw that with Hamilton this weekend and we saw it with Houston on Tuesday. Matt Hackett, in the midst of a devastating callup to Kuemper (not him), shut down the Texas offense. Usually outshooting the other club 37-17 and only allowing one goal through 65 is enough for a win. Tuesday it wasn't because Texas got the Aeros' best effort. Expect more of the same for the rest of the season.

In other notes, Texas Stars forward Taylor Vause ends his second 25-game tryout contract this Friday. The rules stipulate that a player must either be signed to a standard contract or released after the second PTO. After having a tough time getting into the lineup during his first PTO, Vause has been a consistent lineup presence during his second. He got into nine games through the first PTO and had no points and a minus-9 rating. Immediately after signing his new PTO on December 12th, he scored a goal against Abbotsford. He's gotten into 21 games in this PTO and has 2-5-7 with a plus-3 rating.

Those numbers combined with the current roster shuffling should be enough to keep him around. If that wasn't enough though, I'm sure all Texas Stars viewers have noticed the intangible of his speed. When Vause gets a lane, watch out. He beats icing calls and is monsterous on the forecheck. He makes life difficult for opposing defenseman and has been counted on to kill penalties as well. There's no way the team can let him walk.

For those wondering, Gord Baldwin's PTO will expire on the game on February 26th at Oklahoma City. He can re-sign a new PTO at that point though since his current tryout is just his first.
analysis