Posted by Stephen Meserve on June 18, 2014
Isn't it a beautiful day today?
Thanks to the wonders of social media, we can all go inside the locker room with the Texas Stars after last night's win.

OT hero Patrik Nemeth and his Swedish partner in crime, goalie Cristopher Nilstorp, were all over the hashtags in this Calder Cup #selfie.


Still on the ice, Brendan Ranford managed to get this tweet off including savvy vet Chris Mueller.

Big time playoff contributor, Mike Hedden, went with the plain clothes picture as the team prepared to head out for a night on the town with their newly acquired hardware.

Taylor Vause will get his name on the Cup after playing in a few playoff games. He's got the Cup Raise photo to go with it as well.

Training staff, equipment managers and assistants all get their chance at the Cup as well. Jorge Lopez, who Curtis McKenzie once referred to as 'key' to the playoff run, gets his shot with the Cup here.


Big thank you to everyone for the great tweets. Unbelievable feeling. Austin, we're bringing back the cup! pic.twitter.com/X78vA1bvcw
— Jorge Lopez (@JorgieLopez) June 18, 2014

Midseason acquisition Kevin Henderson has a toothy grin as he reminds himself of the five long years he has waited to reach this pinnacle.

Jack Campbell will also get his share of the Cup, playing some key early games in the run. What a feeling, indeed.

Given the length of the road trip, Texas wasn't shy about sharing their win with anyone who came to watch the clinching victory. Readers Mark and Erinn Hughes have quite the memory of the night...


Just sang we are the champions with the @TexasStars #txstars
— Mark Harrill (@atxstranger) June 18, 2014


And of course, a picture with the hardware.

Texas will get on the plane today (if they can drag themselves out of bed after a surely late night) and bring the cup back to Texas. The Calder Cup has already changed addresses over to its new home, according to @CalderCup: 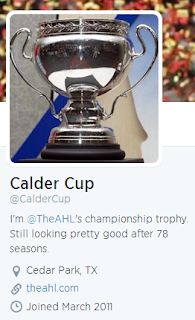